in Crypto Games
Reading Time: 12min read
A A

With another win in game eight of the 2021 FIDE World Chess Championship, GM Magnus Carlsen extended his lead to two points going into the third rest day. GM Ian Nepomniachtchi initially defended creatively in another Petroff but then blundered a pawn and collapsed quickly after. Game nine is scheduled for Tuesday at 16:30 Dubai time (13:30 CET, 4:30 a.m. Pacific).

How to watch the 2021 FIDE World Chess Championship live

When we asked many grandmasters for their predictions for this year’s world championship, it was GM Hans Niemann who gave one of the most daring ones, saying: “I think if Nepo loses one game, the match is over, just from him, as a player.” The somewhat puzzling way the challenger lost today suggests that Niemann could have been on spot on.

It’s hard to avoid the word “tilt” to describe the rapid demise of Nepomniachtchi’s position after he blundered a pawn. He is now facing a two-point deficit with six games to go. To tie this match, let alone win it, will be a Herculean task.

In world championship history, only two challengers who were two points down against the reigning world champion managed to take over the match and win the title anyway: GM Max Euwe in 1935, where the match was limited to 30 games, and Bobby Fischer in 1972, when the so-called Match of the Century was over 24 games.

In his fourth white game, Carlsen switched to 1.e4 for the second time, alternating between his queen’s pawn and king’s pawn twice. It was again met by, expectedly, the Petroff.

Chess.com commentator GM Fabiano Caruana: “It’s what I would do.”

This time, the world champion chose 3.d4, the main alternative to the most popular move 3.Nxe5 that he played in game four. After eight moves, all played fairly fast, a fully symmetrical position appeared on the board and, at the same time, one where the d-file was fully occupied.

According to the Dutch grandmaster Erwin l’Ami, who was one of GM Veselin Topalov’s seconds at his title match with GM Viswanathan Anand in 2010, such symmetry can be deceiving:

Optically Magnus’s opening play may look innocuous but in reality, I think Ian has been caught unaware in a fresh position that is very hard to play. Perhaps 7…f5 was the way to go. #CarlsenNepo

The first big surprise in the game came on move nine. After a 17-minute think, Nepomniachtchi broke the symmetry with the very interesting pawn push 9…h5!?, possibly with the idea to side-step Carlsen’s preparation. If that was the case, it worked because Carlsen would later say that he didn’t know this move.

Caruana suspected that, despite Nepo’s long think, it could still have been prep: “I would be amazed and incredibly impressed if Ian played this over-the-board.”

One thing was clear after the move: we had a fight.

Carlsen spent a whopping 41 minutes on his answer, 10.Qe1+, the longest time he had taken for a single move in the match so far. It was another surprising choice, and our analysts had looked at quite a few other moves. Didn’t this just invite 10…Qe7 and a quick draw?

The world champion admitted 10.Qe1 was an “insipid” choice which he made in a state of slight confusion over his opponent’s moves while finding it hard to calculate: “I just sat thinking for so long that I couldn’t calculate properly, so I decided just to trade queens, and then it probably was just gonna be a draw.”

Later in the press conference, Carlsen added: “I would say my brain was just fried. I felt that a sharp battle was not in my interest.”

I would say my brain was just fried.
—Magnus Carlsen

As Chess.com commentator GM Robert Hess quickly pointed out, one positional point behind the queen check was 10…Kf8 11.Bb4 to trade the dark-squared bishops, which was what happened. Not allowing the queen trade could be seen as an attempt by Nepomniachitchi to play for a win, because 10…Qe7 looked like a safe option, but that wasn’t the case.

“I didn’t see the difference between 10…Qe7 and 10…Kf8; I thought that, anyway, it will end quickly in a draw,” Nepomniachtchi said afterward. “10.Qe1 was a brilliant practical decision, just to offer a draw silently.”

Carlsen indeed traded bishops on b4 and then avoided the queen trade. His opponent then played his 14th move, activating his rook along the h-file, after only 13 seconds—more or less instantly—and also his 17th move was played fairly quickly. Was he playing too fast?

Around this time, Caruana felt Black was in trouble: “I’ve played positions far better for Black and felt under pressure. This is an eternal initiative.”

Strong engines, who don’t feel such pressure, were more optimistic with their evaluation for Black, but that changed all of a sudden when Nepomniachtchi lashed out with 21…b5?, this time after four minutes of thinking, and causing a triple “WOW!” from our commentators in the studio.

Am I the only one not to understand what the hell is going on today? #WCC2021

Nepomniachtchi poured in some more tea, looked at his opponent but then walked away from the board. Carlsen’s body language revealed surprise, and after five and a half minutes of double-checking, the world champion gave the queen check to snatch the pawn his opponent had gifted him.

After 22.Qa3+ was played, Nepomniachtchi remained away from the board for a full eight minutes while his clock was ticking before he finally showed up at the board again. “He might be putting water on his face and regretting 21…b5 at this point,” said IM Danny Rensch, and that was exactly what was happening.

“For quite some time I was regretting to play 21…b5,” said Nepo about staying in his rest room so long. “In a very drawish position, blundering a pawn like this, it hurts.”

In a very drawish position, blundering a pawn like this, it hurts.
—Ian Nepomniachtchi

So what was it that he had missed? Well, not the queen check: “I saw it, but I forgot that in the line 22…Kg8 23.Qa7 bxc4 actually the bishop is hanging.”

While White played accurately and with a steady hand, the move primarily responsible for today’s decisive result was Black’s blunder on move 21. This move loses a pawn by force after 22. Qa3+, as in the game. Instead, Black could have played 21…Kg8 as GM Sam Shankland writes: “This was absolutely the only move, getting the king off of f8 so that Qa3 does not come with check, and Black would be able to play Qxd4 in response. Still, it looks very scary…” After the game, Carlsen mentioned to his opponent he expected 21…Qd6 instead of 21…b5 and Nepo agreed that it would have been better. Review the game’s key moments, get coaching explanations, retry mistakes, and more with Chess.com’s revolutionary Game Review tool. 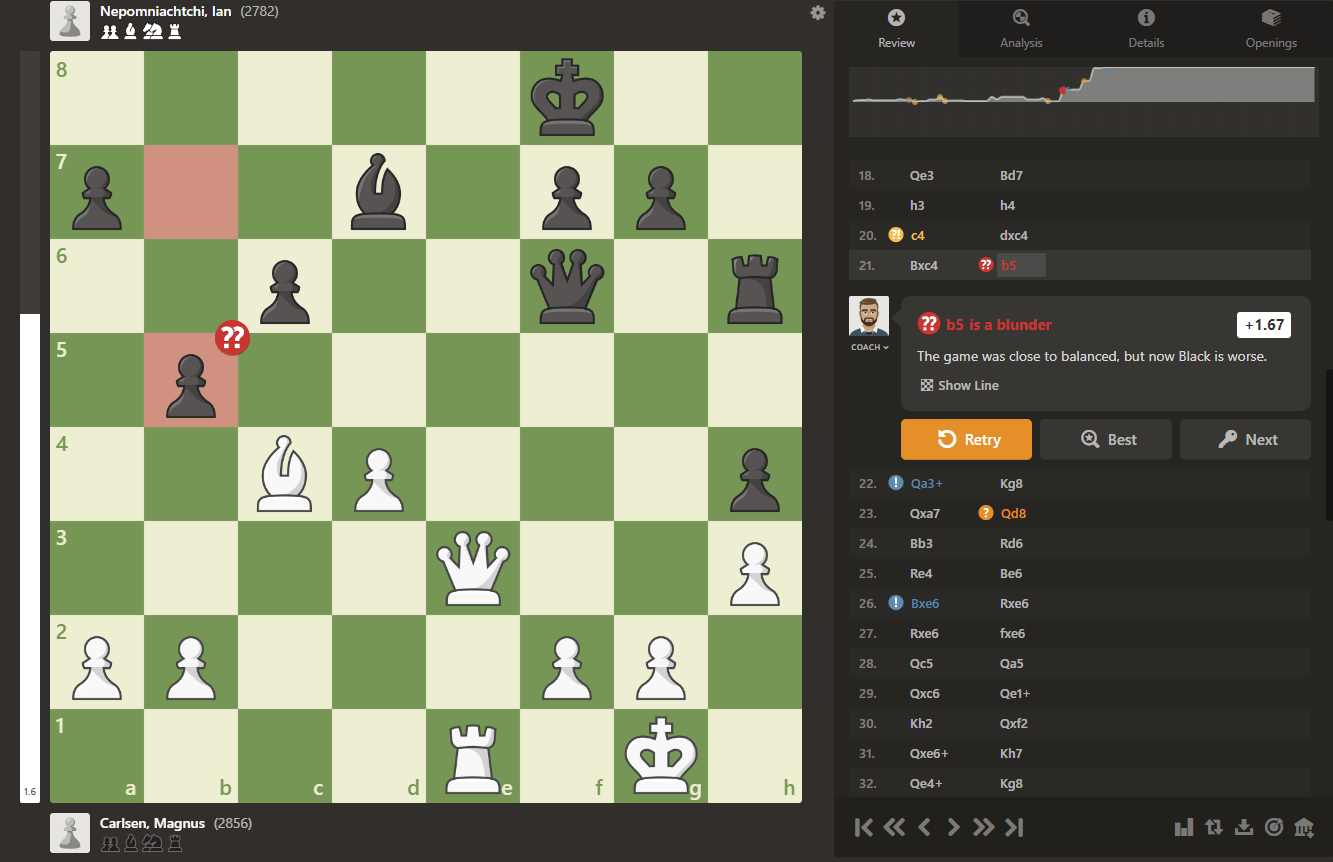 Nepo eventually came back to the board, tucked his king away, and soon it became clear that he had trouble dealing with what just happened. A few more inaccurate moves from the Russian GM were enough to end up in a lost position rather quickly.

“This is just tilt.” — @FabianoCaruana.

Hess: “He’s sloppy at moments when you cannot afford it. And you cannot afford it at any moment when you’re facing Magnus Carlsen, no matter the event. But… the magnitude. He is having his one shot at the world title; he may never get that opportunity again. When it’s your moment, and you’re down a pawn, you need to go for it.”

Nepomniachtchi, at the press conference: “Of course, after 21…b5, well, probably I didn’t defend in the best way, but it becomes really unpleasant and I guess, frankly speaking, it’s hard to defend after such a blunder.”

Frankly speaking, it’s hard to defend after such a blunder.
—Ian Nepomniachtchi

On move 28, only queens and pawns were left on the board, but Carlsen had two extra pawns and, at that point, it seemed Nepomniachtchi was just “blitzing out moves to get to a position that is reasonable to resign,” as Rensch put it.

Carlsen, however, didn’t blitz along and, in fact, spent a surprisingly large amount of time in that completely winning endgame, the type of caution that was most instructive and widely applauded. “I have plenty of time, there’s no reason to force things quite yet,” he said. “I thought the win is not going away, let’s just be really careful.”


Nepomniachtchi was surprisingly cheerful once again at the press conference while being quite harsh on himself at the same time, saying: “I’d like to apologize for today’s performance. It was probably far below—not even, let’s say—my normal level but below GM level.”

He called it “a chain of slightly weird decisions, starting with 15…Kf8” and admitted that 21…b5 was “just a very bad blunder” in a position that was, although slightly unpleasant, still close to a draw.

Looking forward to the remaining six games, the challenger said: “The task remains the same; I’ve got to try and win some games. I believe it’s about the level of chess. I think at the beginning of the match, I got quite some chances and, hopefully, if I play well, I will keep getting these chances. It’s about my own play. I don’t think I should think about the score, but yeah, indeed it would be better if I would have an equal score instead of this one. But we have what we have.”

Carlsen, obviously very happy with the result: “What can I say, it’s huge. Otherwise, I’m pretty tired and looking forward to the rest day.”

His explanation of his opponent’s blunder: “To be honest, this second win probably doesn’t come without the first, so everything is kind of connected. For instance, if I had won the first game against Caruana when I had a winning position or he had won one of the two games where he had a winning position, things could have turned out a lot different—there could have been a lot more decisive games. It’s not a shock that the second one comes quickly after the first.”

Still not fully recovered from that grueling sixth game, the players will need their rest day more than ever. Our Game Of The Day annotator GM Sam Shankland has a suggestion for Nepomniachtchi:

“If I were on his team, I would suggest going for something sharper and riskier than what he has done so far—these slight advantages in the Spanish are playing right into Magnus’ wheelhouse; he is easily holding every time. While on stream with Hikaru, we learned that the last time Magnus lost with Black in the Spanish in classical chess was 2015!”

Chess.com’s coverage is brought to you by Coinbase. Whether you’re looking to make your first crypto purchase or you’re an experienced trader, Coinbase has you covered. Earn crypto by learning about crypto with Coinbase Earn, power up your trading with Coinbase’s advanced features, get exclusive rewards when you spend with Coinbase Card, and much more. Learn more at Coinbase.com/Chess.

Top Crypto Trends to Watch in 2022, According to Pantera’s Paul Veradittakit

Metaverse Offers Future Full of Potential – for Terrorists and Extremists, too

More Than $1.5 Million In Ethereum Is Missing From MultiChain Hack